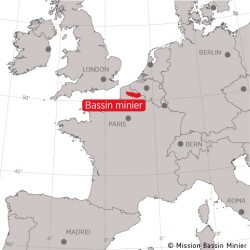 The Nord-Pas de Calais Mining Basin is located in the north of France. It is the western-most tip of the continental European coal mining district. On a larger scale, it is part of a coal seam running from Colombia to the Appalachian region in the USA, Eire to Ukraine, Kazakhstan to China and India. The Nord-Pas de Calais seam is one of the largest in North-west Europe, second only to that of the Ruhr Valley in Germany. It is the only large seam that is completely underground, running 120 kilometres long, 12 kilometres wide and 1.2 kilometres deep. Given its geographical location, the Mining Basin is at the centre of a remarkable hub region, the Nord-Pas de Calais, and a major communication hub between major European cities.

In 1720, History was in the making. Jacques Desandrouin discovered low-grade coal in Fresnes-sur-Escaut, in what is now the Nord département. The territory’s potential for coal-mining was confirmed in 1734, in Anzin, with the discovery of bituminous coal. After much hesitation, the first ever mining company was founded in 1757, the Compagnie des mines d’Anzin, which was to become one of the most powerful companies in France. In 1773, a second company was set up, in Aniche. Through to the mid-19th century, the Bassin du Nord was the only known seam in operation, despite much prospecting towards Arras. The true direction of the seam was only understood when an artesian mineshaft was being sunk by chance in Oignies in 1842. It actually went towards Béthune. The Pas-de-Calais basin was set to come into being. Mining companies including those of Courrières, Lens, Béthune and Bruay started mushrooming in a frenzy. They would prove highly prosperous. By the late 19th century, the definitive map of the largest Mining Basin in France had been drawn, that of the Nord-Pas de Calais. 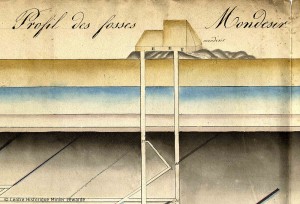 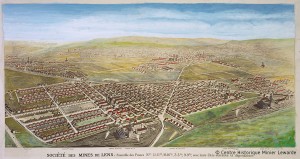 Record production was achieved in 1930, however the first half of the 20th century was studded with major catastrophes: the Courrières catastrophe in 1906, in which 1,099 perished; World War I which destroyed two thirds of the territory; World War II which bled the basin dry. A major turning-point came in 1946, with the Basin becoming state property, further to an order in 1944. The « Battle For Coal », lasting from 1944 to 1947, helped to partly rebuild France. The coal industry went into slow decline in the 1960s, with the last coal being brought up from colliery No. 9-9bis in Oignies on 21 December 1990. Parallel to this, policies to support the reconversion of the territory would lead to the Mining Basin being nominated for World Heritage in the early Noughties.

In between these important dates, the heritage and landscapes of Mining Basin tell many other stories: the great History of the Industrial revolution and industrialisation; that of technology and innovation in the 19th and 20th centuries, that of industrial architecture, miners’ housing, in Europe and worldwide. As well as all the stories, of both society and of individuals, all those who contributed to the shaping of this territory.

> A territory shared among mining companies