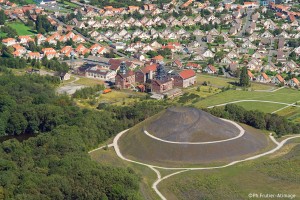 he Mining Basin is surprising for various reasons. The fact that the landscape still features collieries, headgear structures, waste tips and housing developments refutes the premise that this heritage disappeared along with the coal mining industry. Moreover, the amazing diversity of its landscape does away with the cliché of identical black waste tips rising above terraced rows of miners’ houses like little boxes on the hillside! There are actually many different landscapes to be observed between the eastern and western tips of the Mining Basin. From « mines in the forest » to « mines in the countryside » by way of the industrial cities, the impact of mining takes different shapes according to natural, agricultural and urban specifics of pre-existing territory.

At the turn of the 19th century, the mining companies were still using the same mine structure, known as « colliery-waste tip-housing development »: with waste tips to store the sterile rock and housing developments for the miners clustered around the entrance to the colliery with its surface machinery used for mining coal. Mining lasted for several centuries, and technical progress led to different shapes and types of colliery, headgear structures and waste tips. Moreover, the territory was split up among several private companies. These companies competed against each other, which led to further variety. 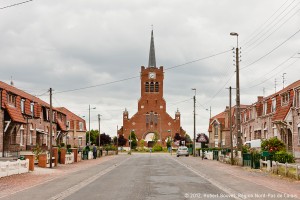 To each their own style! 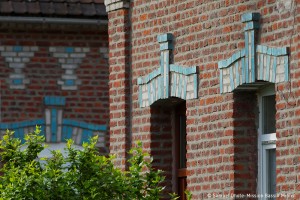 For 150 years, the companies developed their own urban architecture and identity within their concessions, enhancing the heritage to a previously unsuspecting degree. As a display of their opulence and to distinguish themselves from the others, they adorned their headgear structures with festoons, roofing and ornamental plates, like huge badges of identity. The company head offices also had to be impressive. As one of the most prosperous mining companies along with Anzin and Courrières, the Sociéte de Lens built its Art Déco Grand Offices in 1928 with a garden laid out in classic French style.

Attracting a workforce was harder than is mostly supposed. Companies rivalled with each other to offer miners the most attractive housing and the best community facilities. Compagnie d’Aniche housing developments were distinctive, with adorned façades and gables. The Compagnie d’Anzin decorated its façades with colourful glazed bricks while that of Lens opted for half-timbering and millstone grit. In 1904, the Société des Mines de Dourges imported the concept of garden city developments from Britain. This was soon imitated by other companies. For their community facilities, they readily employed renowned architects. The Compagnie des mines de Noeux for example asked architect Constant Moyaux, who won the Grand Prix de Rome, to build Sainte-Barbe’s church. These architectural projects were good publicity and served as landmarks for companies determined to distinguish their concessions.

This highly varied social heritage also applies to the miners and their families. Working class heritage forged its identity in union struggles, and leisure culture specific to the community: sport (especially football), music (miners’ choirs), gardening, pigeon racing etc. A culture which respected the 29 nationalities of miners in the Mining Basin, yet again proving its amazing diversity.